British people love to talk about the weather in London. I always wondered why, and then I moved to the UK and realized it’s because it’s always changing. Now I keep getting asked about the weather. From email to Instagram, so many people have asked me for advice that today I want to dedicate a blog post to the topic. If you’re one of the curious, read on for my month-by-month guide to what to expect from the London weather. 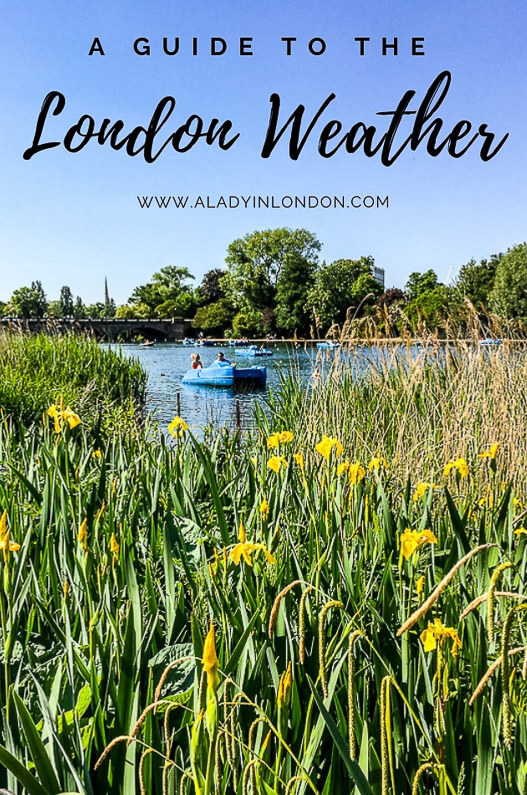 Let me start by saying that the weather in London is predictably unpredictable. The city can see four seasons in a day or two seasons in a year.

Summer in London can be scorching for months or damp for the duration, and winters can see blankets of snow or carpets of early daffodils. Rain is a constant threat, but it doesn’t actually fall as much as you might fear. 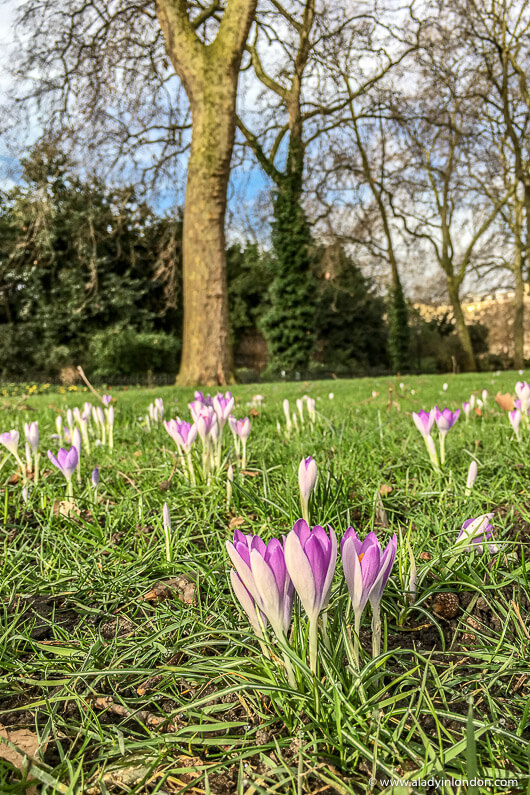 Since things change so quickly, it’s a good idea to check the London weather forecast before you travel to the UK capital (hopefully you would do that anyway).

And if you want packing tips, you can take a look at my winter, spring, summer, and autumn packing lists for London. 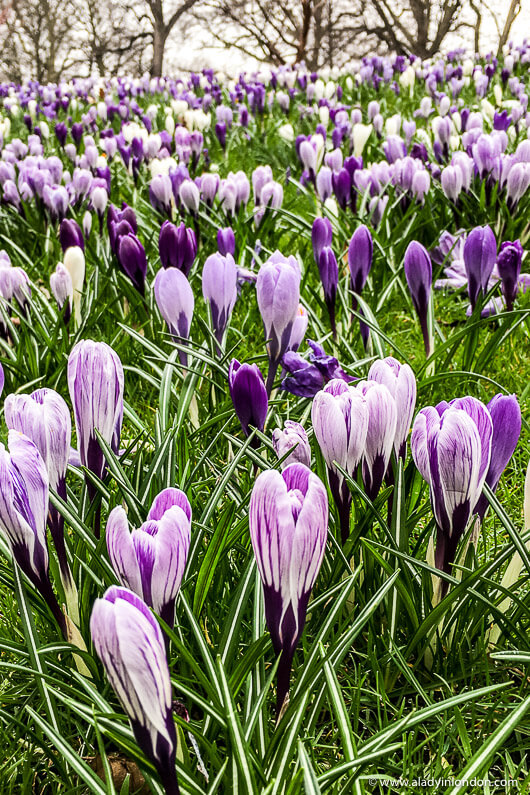 January is generally a cold month in London (for a Californian like me, anyway). The average high is 9 degrees Celsius, or 48 degrees Fahrenheit.

Temperatures can hover near freezing, though, and in some years London gets snow in January. That said, it can also be milder than expected and even reach into the double digits Celsius, or low 50’s Fahrenheit.

Like most months in London, January can be gray for weeks at a time. It’s also close to the winter solstice so the sun tends to rise around 8am and set around 4pm, making the days short and sweet. 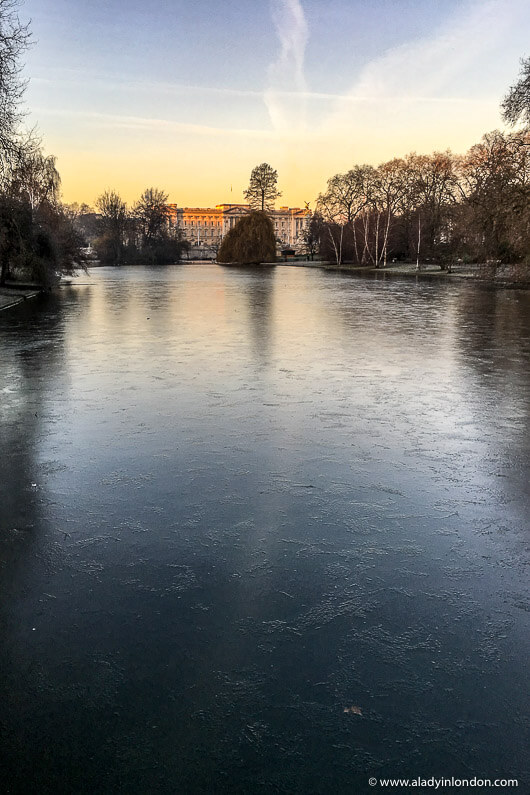 February is pretty much the same as January, although it always seems colder to me. The average high temperature remains constant, and the low creeps up from 4 degrees Celsius to 5, or 39 degrees Fahrenheit to 41.

The one redeeming thing about February is that the days finally start getting longer. By the end of the month, the sun rises by 7am and sets after 5:30pm. It feels like spring might finally come. 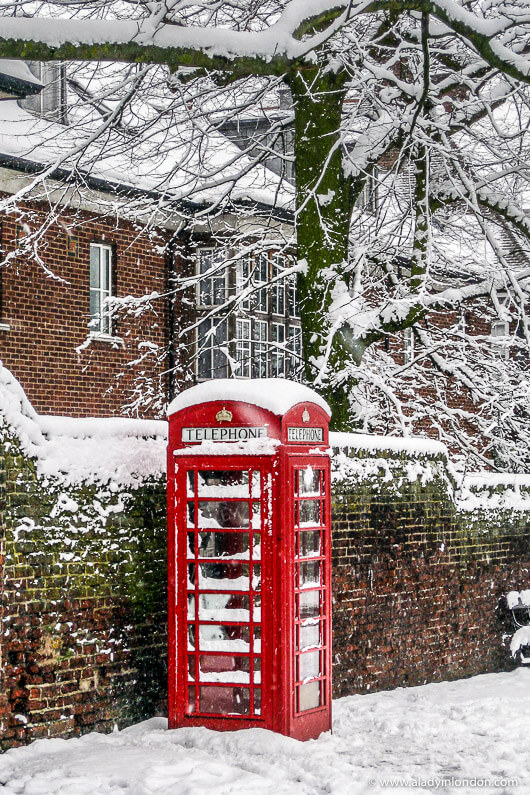 March is fickle. In some years March feels like spring in London, while in others it snows all month. I’ve spent weekends outdoors without a coat some years, and days bundled up inside with the heat on full blast in others.

The weather in London in March sees average highs of 12 degrees Celsius, or 54 degrees Fahrenheit. The reality can be vastly different.

One thing that’s certain is that the days get longer in March. And with the spring flowers coming out, the city starts to cheer up even if the skies stay gray. 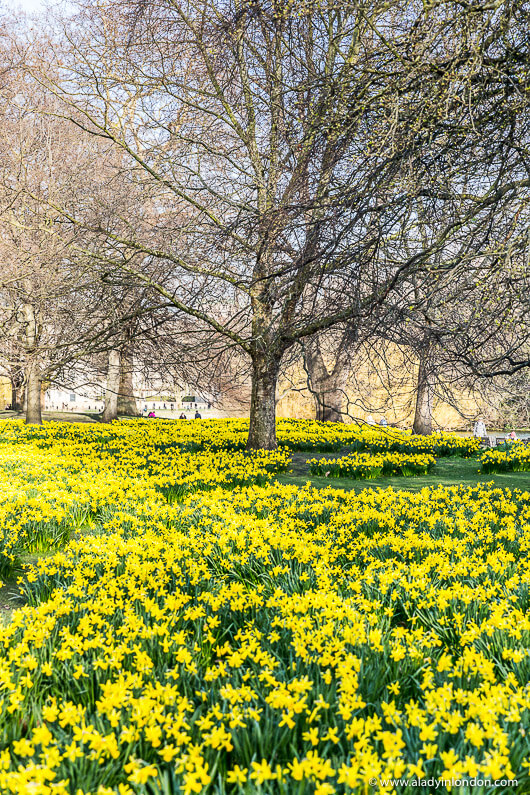 April is equally unpredictable. In some years London experiences record-breaking heat in April, and in others it snows. My birthday is in April, and I’ve spent as many birthdays in sundresses as I have in winter coats.

The weather in April in London sees average highs of 15 degrees Celsius, or 59 degrees Fahrenheit. As with March, the days continue to get longer and the spring flowers bring more color to the city. 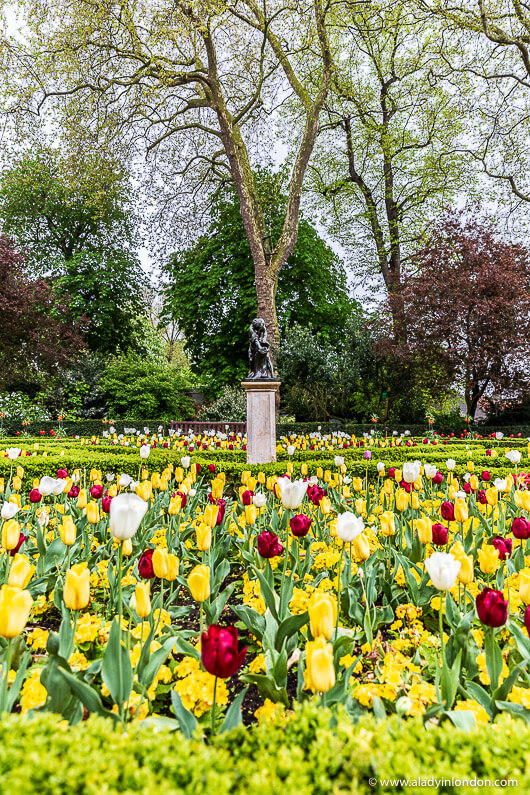 Weather in London: May

May is usually the turning point for the weather in London. By the middle of the month I’ve firmly locked my winter coat and boots away, and there are usually more warm days than cold.

While gray skies and rain are always a possibility, warmer temperatures moderate their gloom.

The weather in London in May sees average highs of 18 degrees Celsius, or 64 degrees Fahrenheit. By the end of May, the sun rises before 5am and sets after 9pm.

It really starts to feel like summer is coming in May, and not a minute too soon. 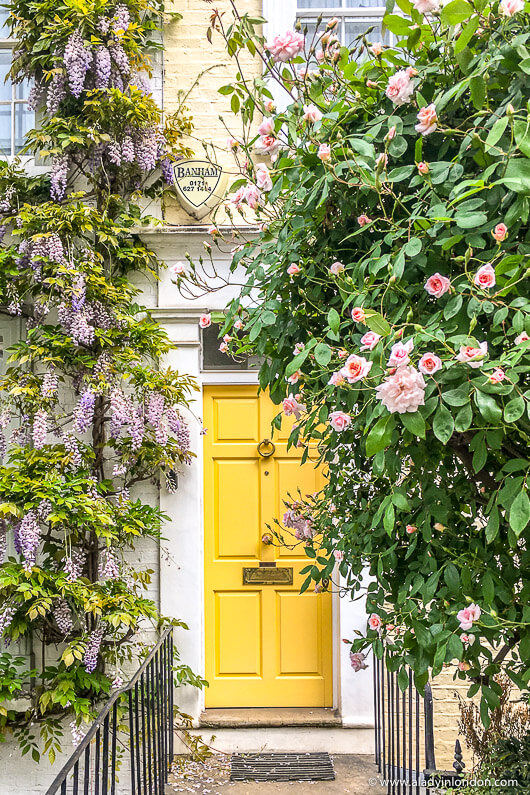 By June, the weather in London is working its way to its annual climax. Average highs can be in the low 20s Celsius, or high 60s Fahrenheit.

Daylight hours continue to increase until the summer solstice, making the city feel bright and giving an impression of warmth even if the reality is a bit different.

June can be windy in London. Despite rising temperatures I often find myself needing to wear an extra layer or two due to wind chill. If you’re coming to London in June I would bring a jacket. My aforementioned summer packing list can help. 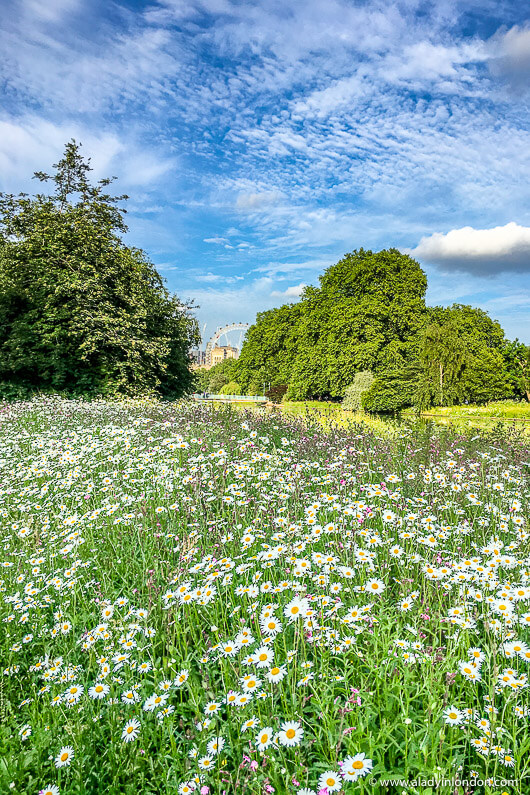 Ah, July. July tends to be one of the warmest months in London, and has some of the longest days of the year.

Average temperatures can climb up to 23 Celsius, or 73 Fahrenheit (which as a Californian I realize isn’t very warm compared to some other parts of the world, but we have to work with what we have). In a good year, July can be heaven.

In a bad year (and Britain has its fair share of them), the weather in London in July can be wet and cold for weeks on end. In a great year, it can be downright hot.

It’s usually a function of how hot or cold the summer has been up to that point, but even in hot summers there are days of downpour in July. Like I said, it’s predictably unpredictable. 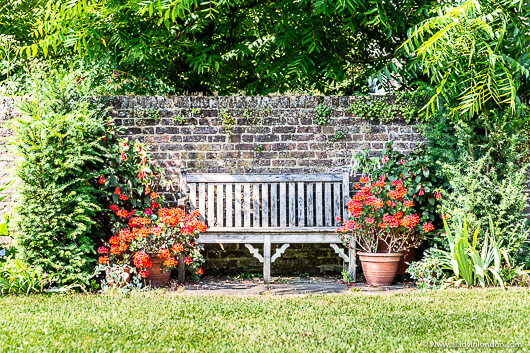 Daylight hours are still pretty long, with the sun rising at 5:45am in the middle of the month and setting around 8:25pm. 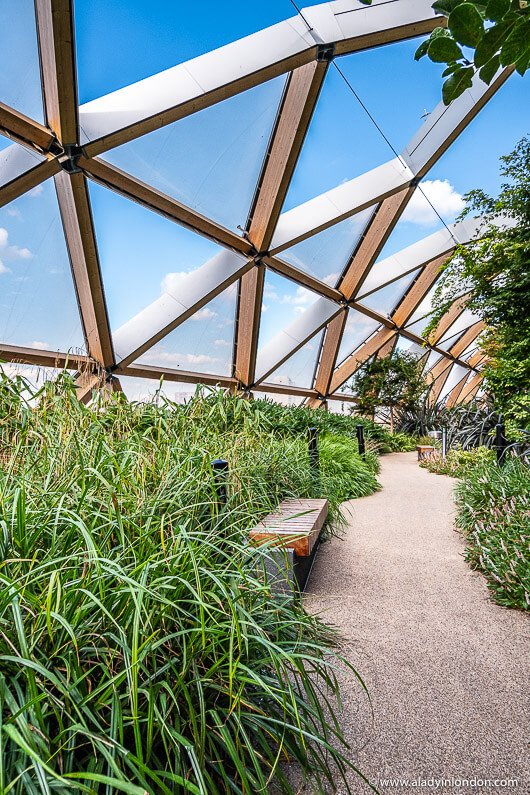 September is another of those months that can either be spectacular or just so-so.

A lot of years London has great weather in September, and summer seems to last well into the beginning of autumn. Sometimes September can just be rainy, though.

The average highs can reach 20 degrees Celsius, or 68 Fahrenheit, making it a pleasant month when the drizzle stays away.

The daylight hours start to shorten in September, but even in the middle of the month the sun rises around 6:30am and sets at 7:15pm. 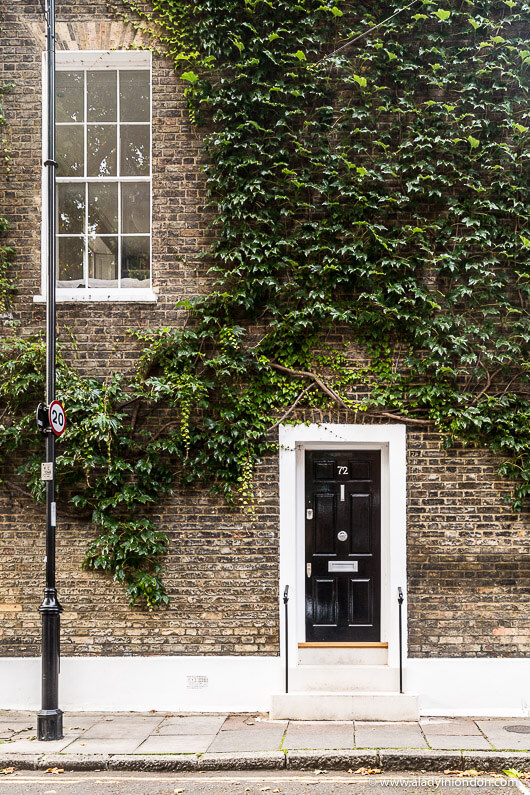 October is equally varied. In some years the weather in London in October sets records for heat, while in others winter seems to make an early appearance.

The average high drops to 16 degrees Celsius, or 61 Fahrenheit, but individual days can vary. Even on warm days the mercury may only reach the high for an hour.

The days really start to shorten in October. By the end of the month the sun rises before 7am and sets around 4:30pm.

Autumn is in the air, and London knows it. Thankfully there are colorful leaves all over the city to ease the seasonal transition. 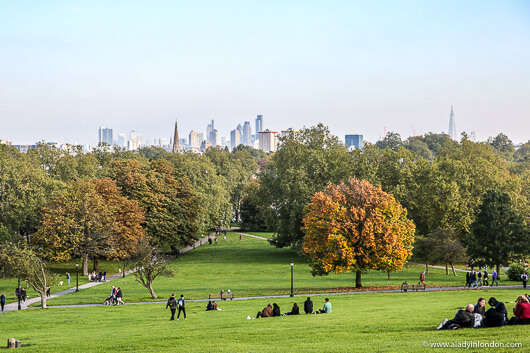 The weather in London in November can be mild or cold, depending on the year. The average high is 12 degrees Celsius, or 54 Fahrenheit, but as with October it often only gets that warm for an hour in the afternoon.

Mornings and evenings in November can be much colder, and the darkness really starts to settle in by the end of the month. It’s a good thing London’s Christmas lights are out in full force, or the nights would feel even longer. 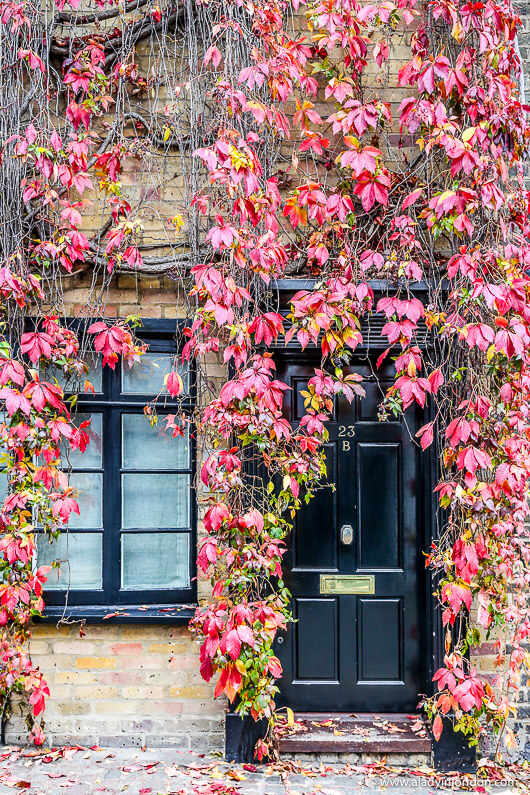 December sees the shortest day of the year arrive with the winter solstice. By the middle of the month the sun rises after 8am and sets before 4pm.

The weather in London in December tends to be cold, and snow is not unheard of (and is plentiful in some years).

The average high is 9 degrees Celsius, or 48 degrees Fahrenheit, but sometimes it’s so mild the cherry blossoms and daffodils come out. 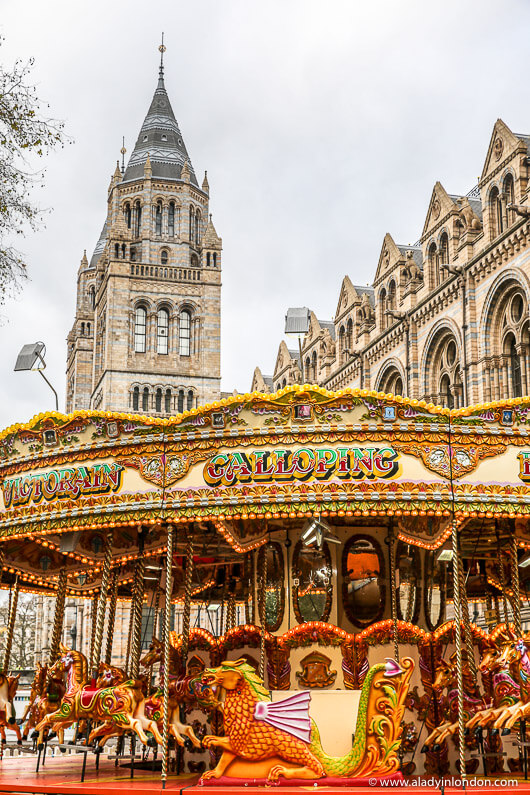 So there you have it. London’s predictably unpredictable weather. Despite the lack of certainty, I hope this blog post has helped you get an idea of what to expect from the weather in London.

And no matter what weather you experience, the city is so amazing you might not even notice.

New here? Join thousands of others and subscribe to the A Lady in London blog via email or Bloglovin’.

8 Comments on Lady’s Guide to the Weather in London

This site uses Akismet to reduce spam. Learn how your comment data is processed. 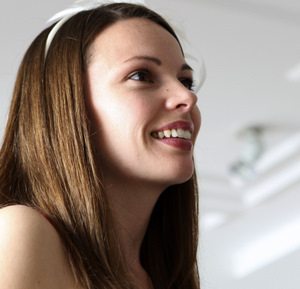 Adventures of an expat Californian living in London and traveling the world. 112 countries and counting!
More...

You have successfully subscribed to the blog.